THE TRAILS
THE CONCEPT
THE SYMBOL 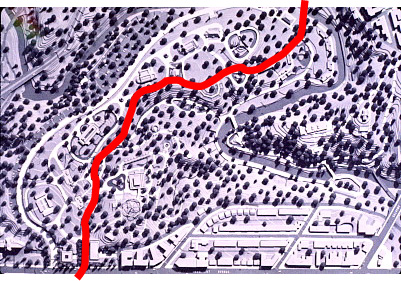 The Zoo Master Plan showing our proposed main artery from which each trail would start and end. This artery was named Olmsted Walk honoring the Park's original designer.
Retained in 1973 to create a new Way-finding System for the new Master Plan developed for the National Zoo. The 163 acre Park was being upgraded to provide more natural habitats for the animals. The original way-finding signage submitted by the Architects was rejected by the Zoo and the Fine Arts Commission.

Working with the Zoo Director, The Fine Arts Commission and the Architect, our new concept focused on establishing a major walkway thru the Zoo from which a series of individual trails would take the visitor past all the major animal exhibits in the Park.

This design approach allowed the Zoo experience to be segmented into a series of family visits rather than the exhaustive “Do it all at once” option. 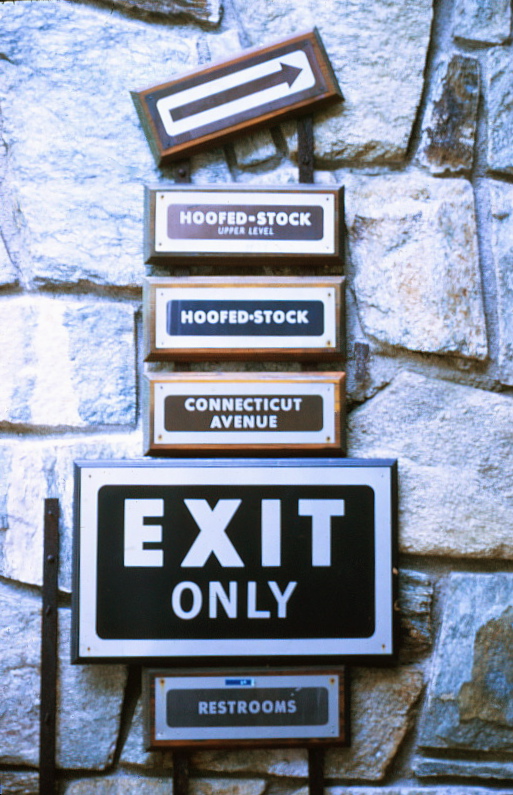 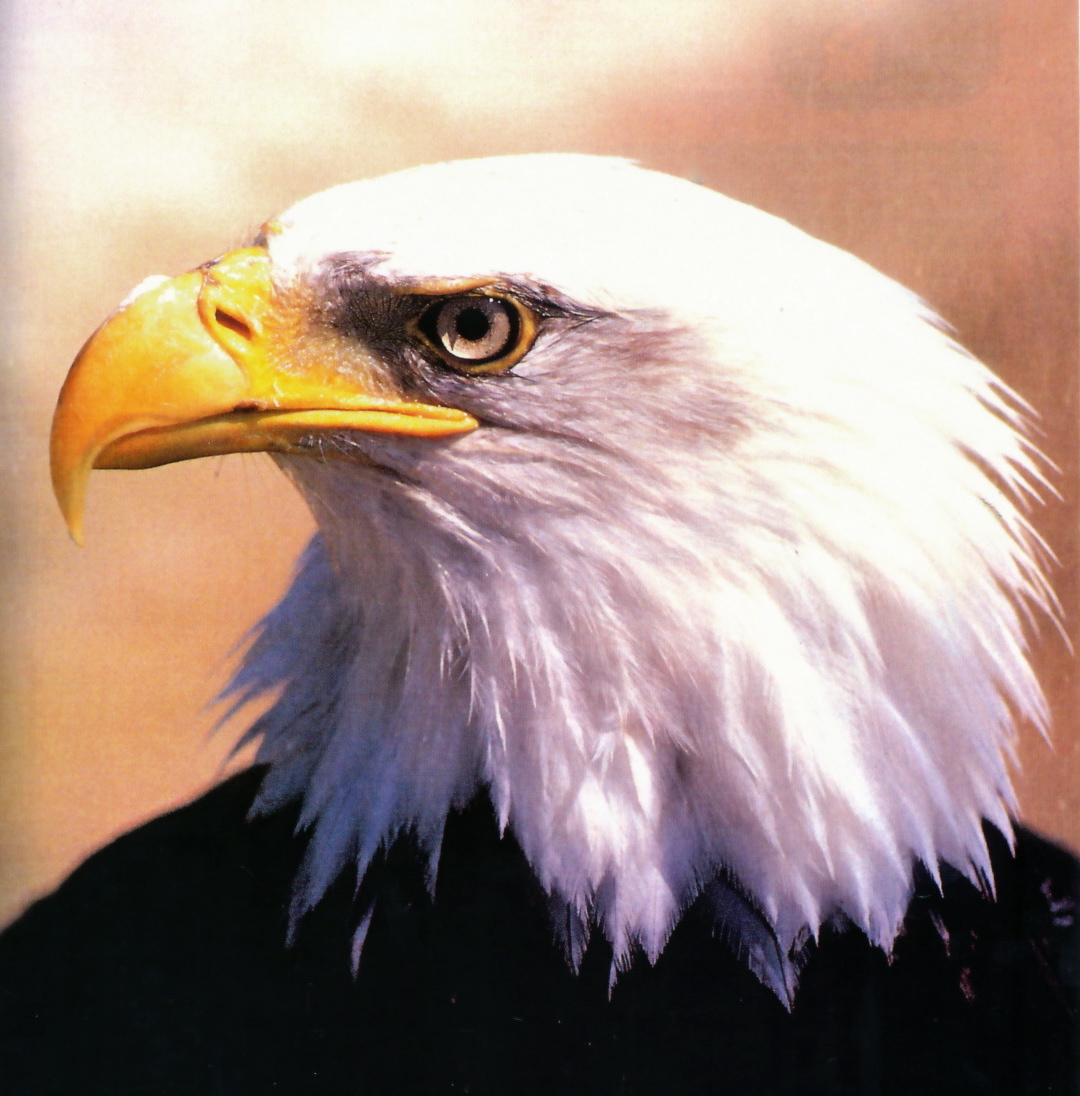 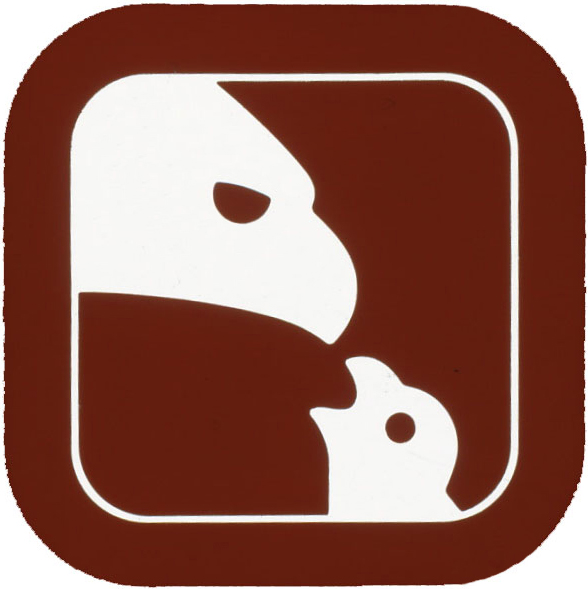 A symbol developed for the Zoo combined the Eagle and its chick representing the Zoo’s mission: “the continuation of the species.”
Existing signage at the Zoo was varied, disorganized, inconsistent and numbered in the hundreds.
THE TOTEMS 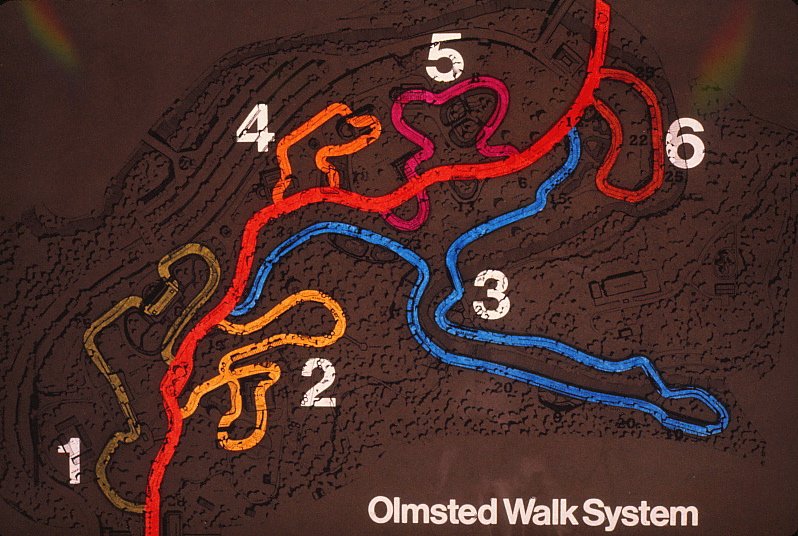 Dedicating the main artery as Olmsted Walk, six trails were plotted to cover specific areas and animals. This gave the visitor 6 options to visit the Zoo. Each Trail started and ended back on Olmsted Walk and would be identified by Totems with animal pictograms. 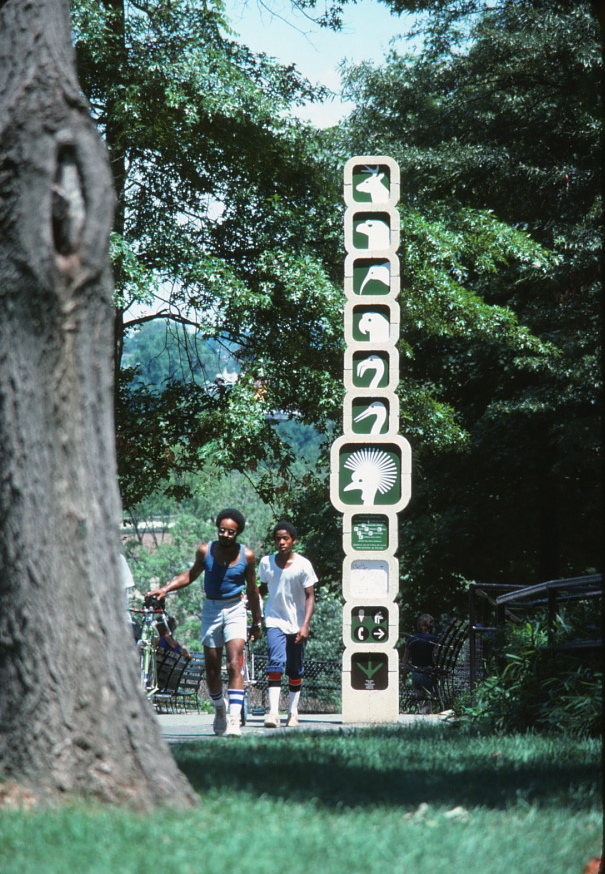 The notion to identify trails with TOTEM like structures provided a base for color coded visual information relative to the features of that trail. A major symbol identified each of the 6 Trails - CRANE, ZEBRA, ELEPHANT, POLAR BEAR, LION and DUCK.
To identify the 6 Trails, 12 TOTEMS were placed on Olmsted Walk to mark the entry to specific trails. Pictograms provided non-verbal information of the animals featured on that Trail.
THE PICTOGRAMS 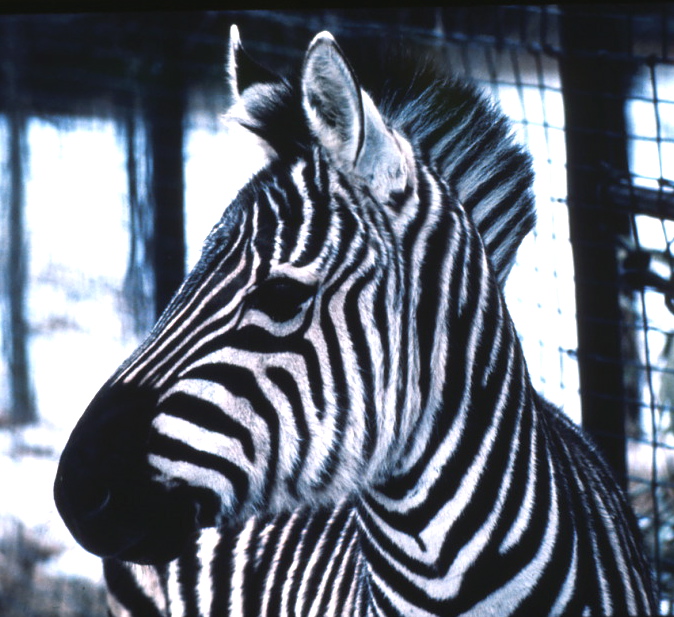 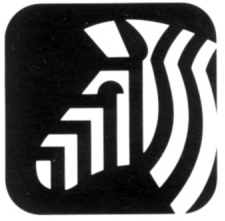 Thirty six pictograms of featured animals are utilized on a variety of items including Totems, Maps, Posters and other Merchandise. 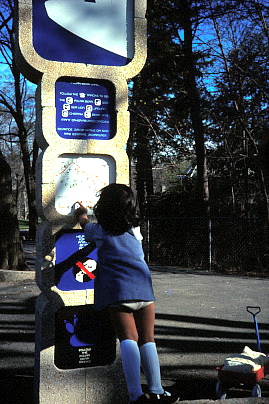 The lower TOTEM panels displayed information on the animals on that Trail, a Trail Map, Services on the Trail and the Trailblazer symbol. 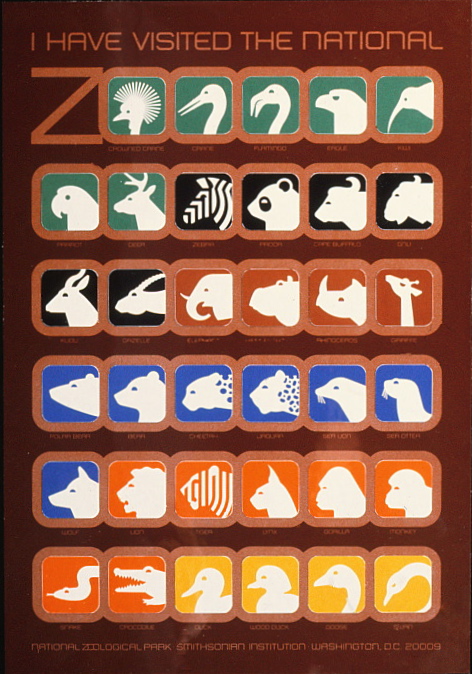 The upper portion of the TOTEM displays pictograms of animal exhibits along that trail. 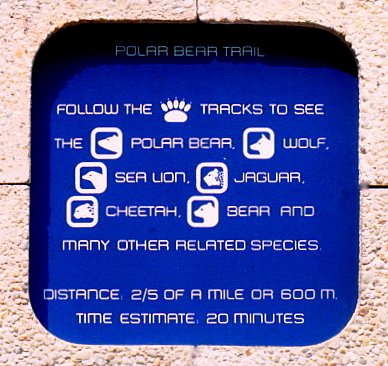 The Trail information panel included a Trailblazer pictogram, the name of the Trail, the animals on that trail, the length of the trail and the estimated time to walk it. 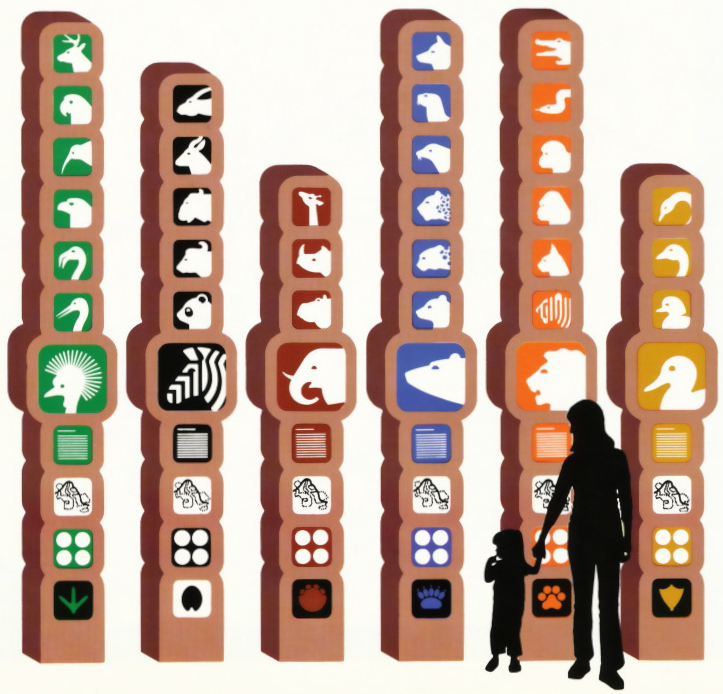 Six color coded TOTEMS mark the beginning of each Trail. Two of each were produced to mark the the Trails beginning or end. 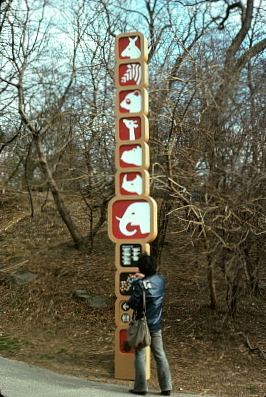 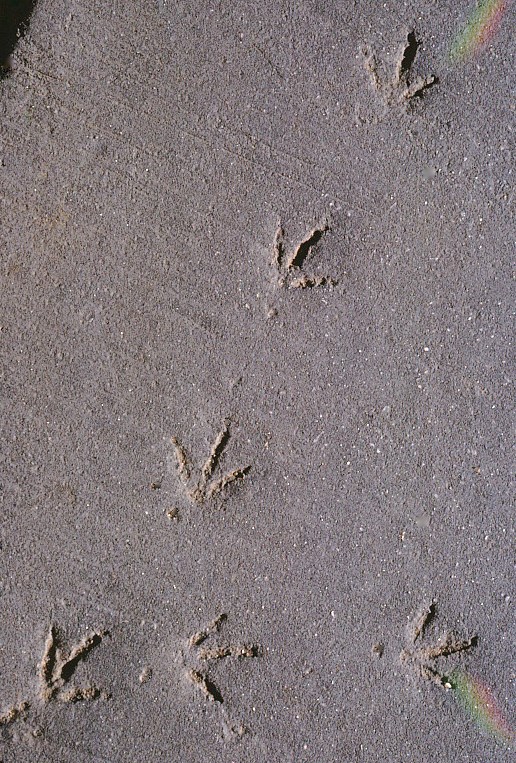 Noting the impressions left in soft concrete triggered the idea for Trail markers.
Taking a hint from nature, the Trailblazer pictograms were then developed for each featured Trail animal. 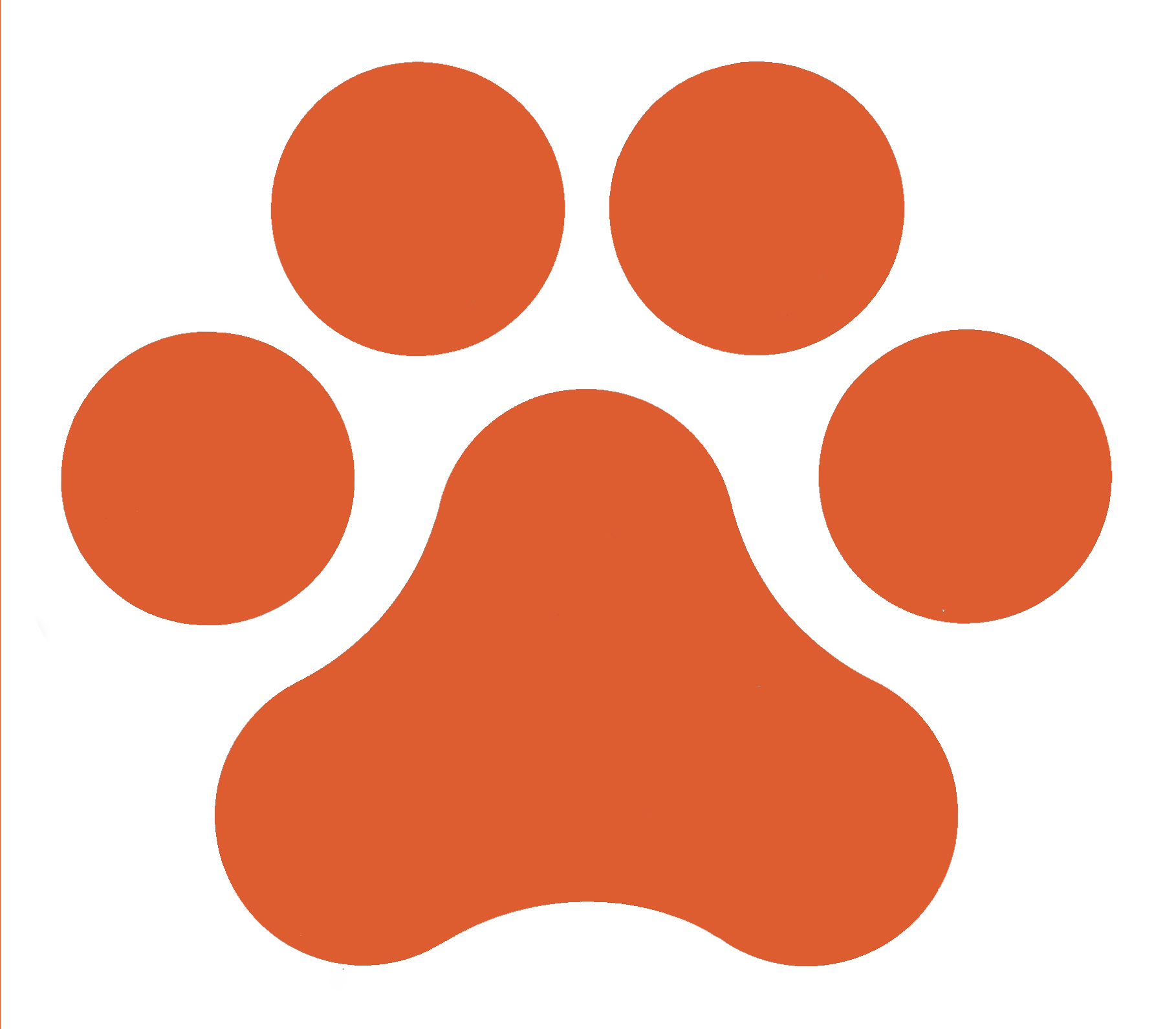 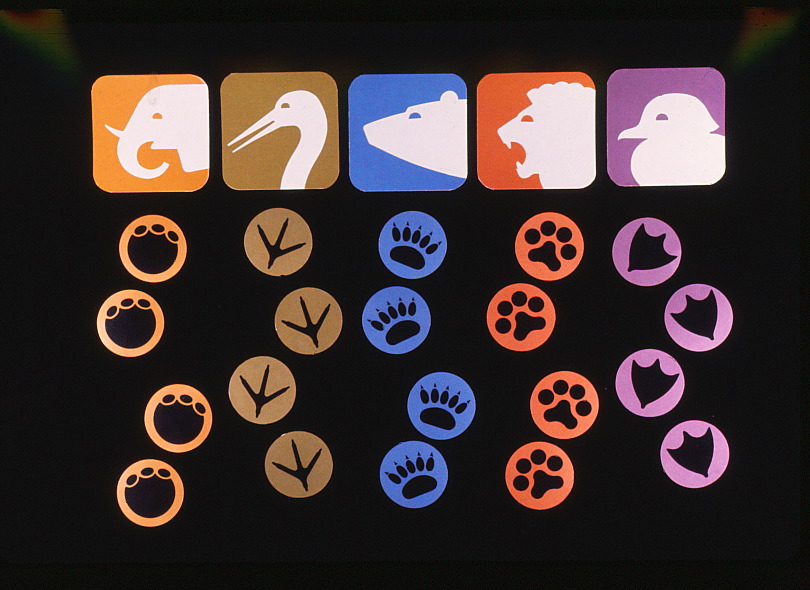 Trailblazers were designed for each of the 6 featured
Trail animals based on their paw prints. 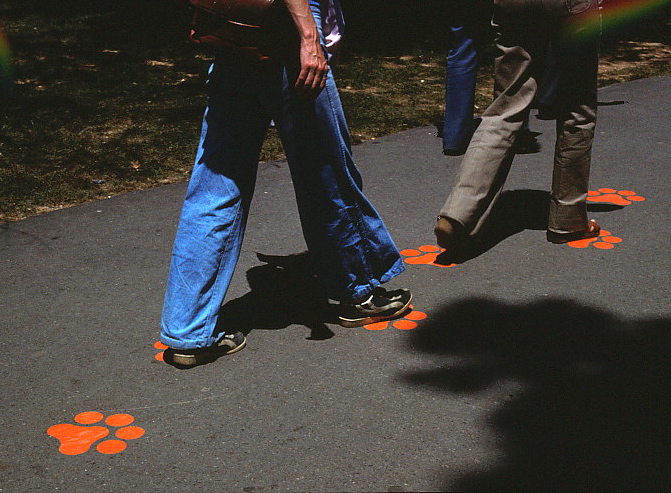 Trailblazers are spaced along each Trail pathway and lead visitors to the specific animal exhibits and back to the main artery, Olmsted Walk.
THE DIRECTORIES 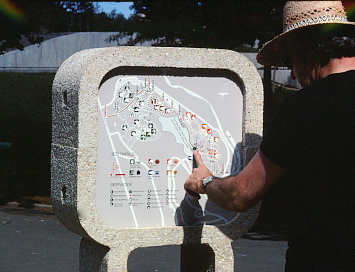 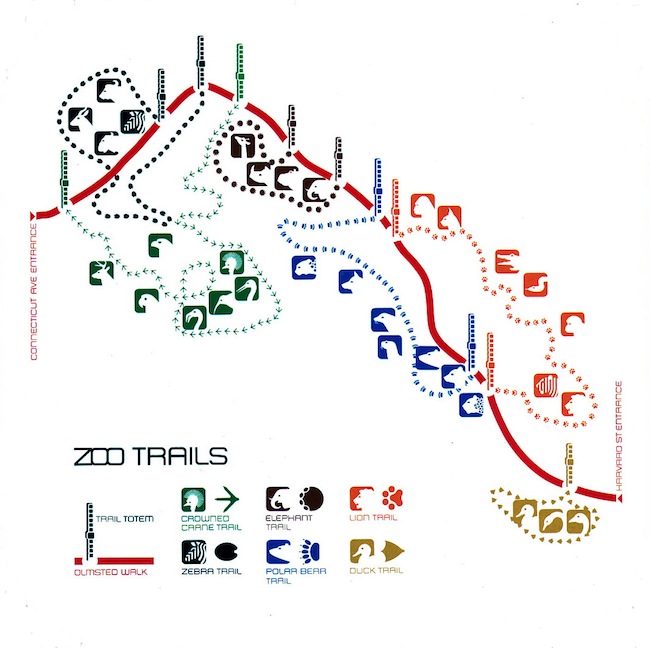 Color-coded Directory Maps (porcelain enamel on steel) use Pictograms and Trailblazers to minimize text and encourage their use by children. 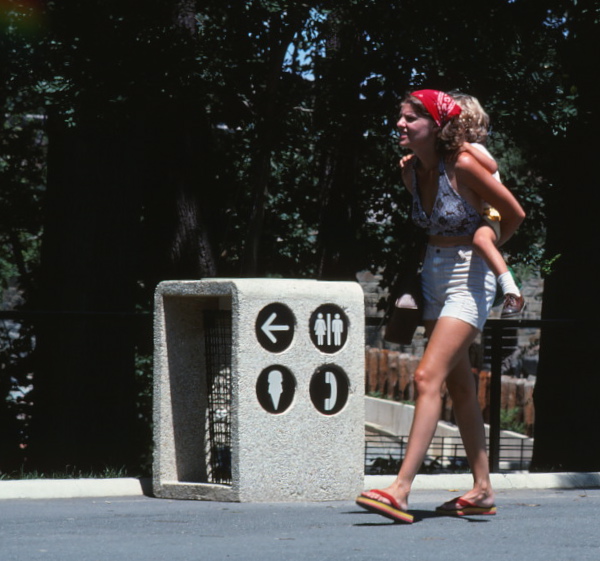 The re-designed trash receptacles (150) served a dual-purpose, displaying directionals for all related services available throughout the ZOO. 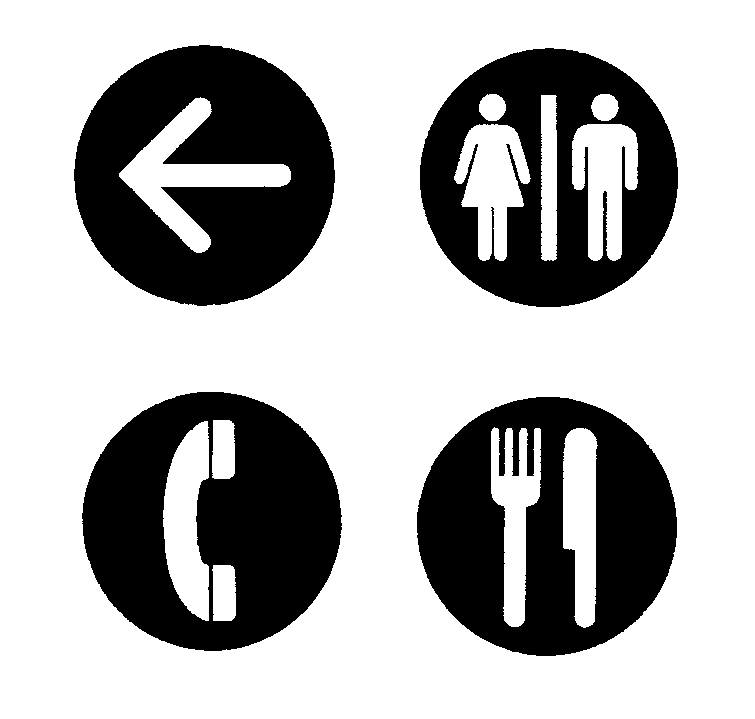 The Service Symbols for directions, restrooms, telephone and food service.
THE TYPOGRAPHY 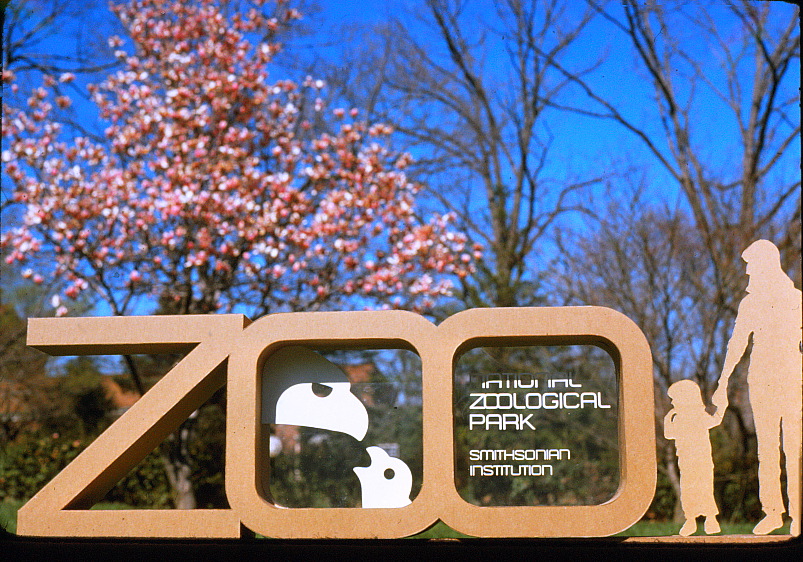 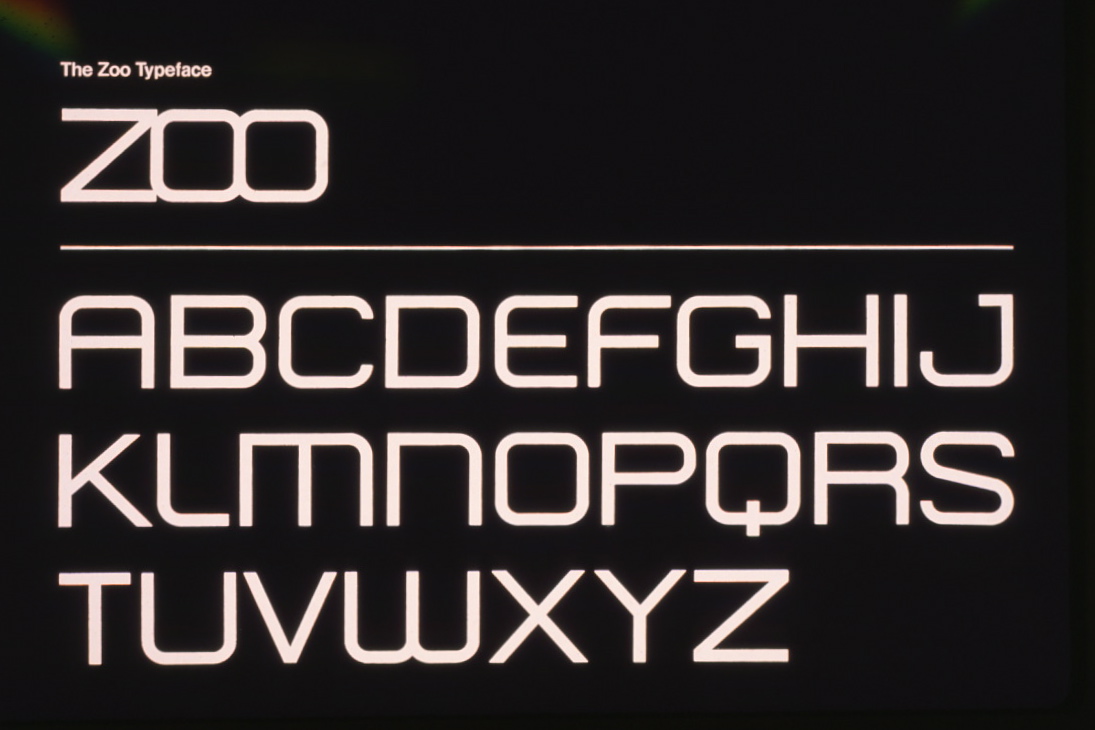 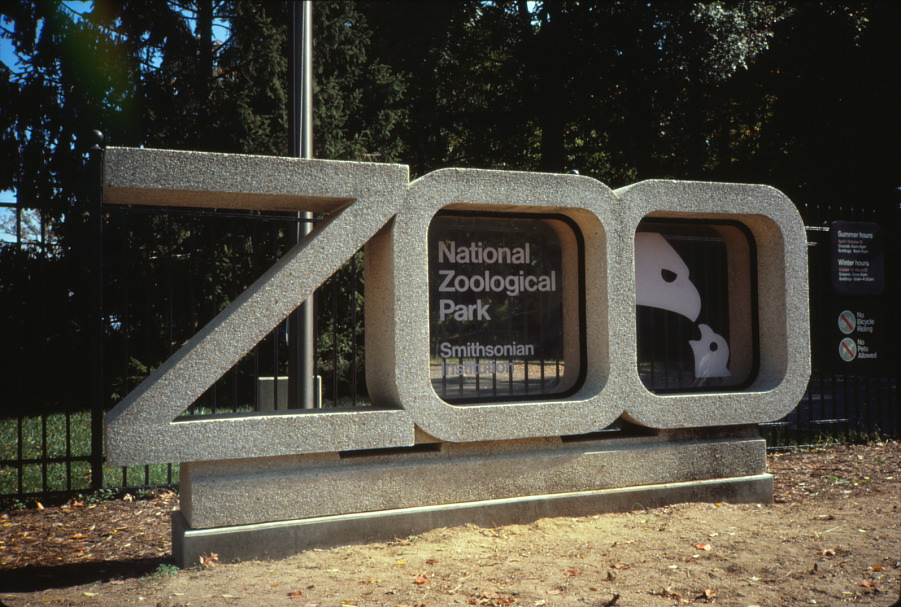 A scale model of the proposed
ZOO’s entrance sign.
The precast ZOO entrance sign with transparent insert panels.
A custom font, based on the geometry of the TOTEM design was developed for all of the ZOO’s text applications.
CONCLUSION
“The final Way-finding System for the National Zoo was accomplished with 2 Entry Signs, 6 Directory Maps and 12 Totems.
Supported by Trailblazers and Service Symbols, this system replaced hundreds of signs that had littered the landscape before.”